As another year draws to an end, it's time for another year in review blog post. And this year I hit the big "four-zero", so it also marks the end of a decade! But don't worry - I won't try and overview the past decade in this post - let's stick with 2018!...

This now marks the second full year of .NET Oxford - a user-group that I started together with Matt Nield. We've continued having monthly meetups, which have been really popular, and even somehow managed to get Jon Skeet himself to join us in October to do a talk on C#8! We had plenty of incredible speakers throughout the year - ranging from very experienced speakers, to also getting first-time speakers onto the stage!

It's really amazing what a great community the software development industry has. So many people happy to give up their free time both speaking and coming along to events like .NET Oxford. I've gotten to know so many more developers (both local and not-so-local) since starting .NET Oxford and getting more into public speaking and attending conferences.

Whilst my motivation for starting .NET Oxford was purely that I love software development and there wasn't a local .NET user-group, so I thought I'd start one - it has also had a ton of other benefits - for example, my past two contracts have come about through people I've gotten to know via .NET Oxford. I also wasn't expecting to get into public speaking when I first started - so that's been another unexpected benefit, which I've really enjoyed doing.

I mentioned in last year's Year in Review post that I wanted to do more public speaking this year, including at least one conference talk. Well, I'm pleased to say that I managed two full-length conference talks (see my Developer Productivity talk blog post); two lightning talks at .NET Oxford (one on Kubernetes, and the other on Vi); and also a lightning talk on LINQPad at DDD East Anglia conference. This is on-top of the monthly intro talks at .NET Oxford (alternating with Matt).

See my Public Speaking page for details of all my talks, and relevant links. 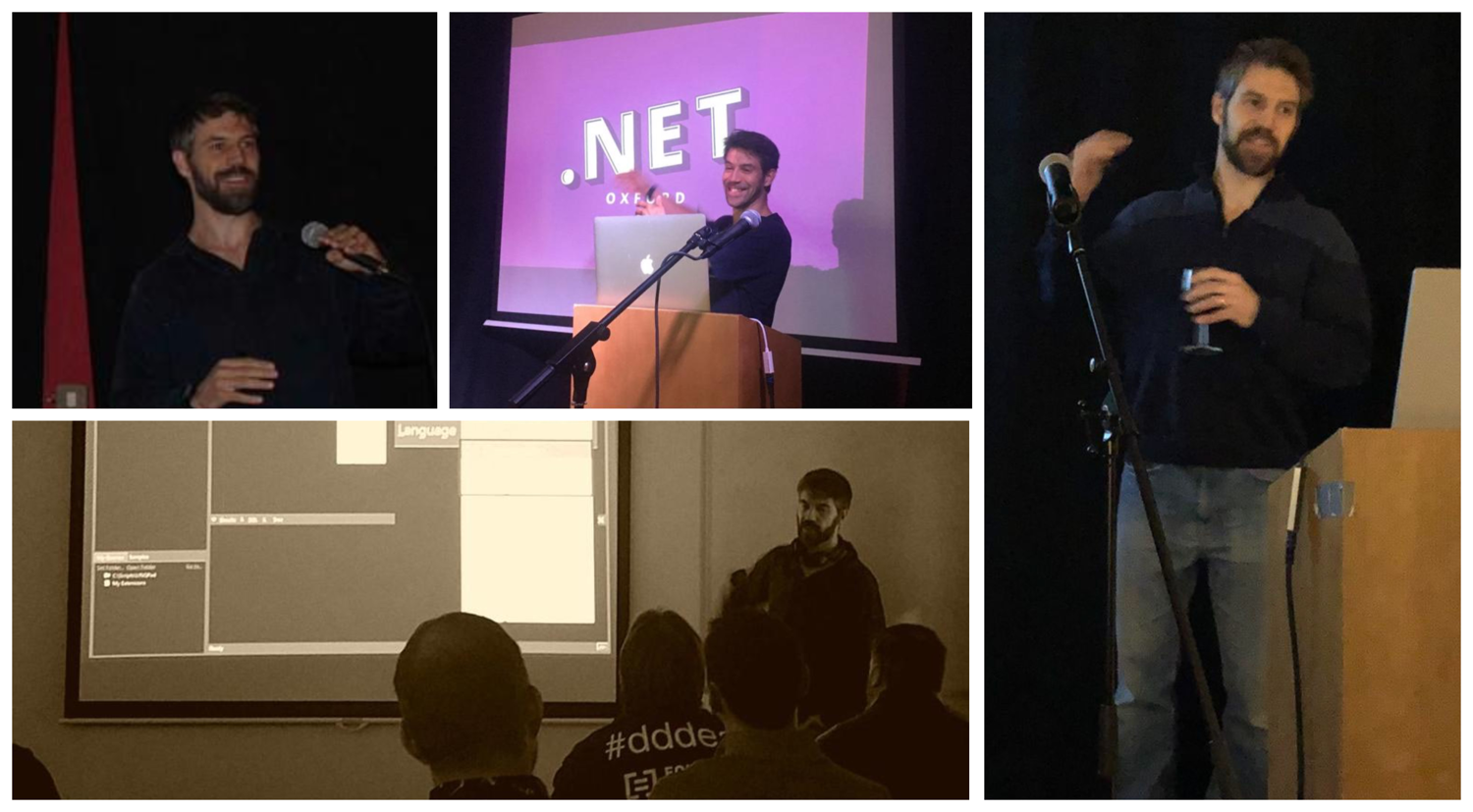 Everstack is my consultation company, and earlier this year I started work with two new clients - Price Synergy and Sharp Life Science, whilst continuing work with DustScan.

PriceSynergy was on a short-term basis creating bespoke e-commerce software. A really interesting piece of work in which I was brought in to get an MVP up and running using newer technologies - eg. .NET Core, Azure Services (including Azure Functions), etc.

Sharp is my primary contract at the moment, and they also extended after the first six months. I'm really enjoying working with Sharp - it's a great team of people, working on some really interesting projects!

I'm also continuing work with DustScan one day a week from my home office. I've worked with them for quite a few years now - previously with a bespoke internal WinForms application, and now working on a cloud migration using more modern technologies and supporting multi-tenancy.

I feel extremely lucky with the teams I've gotten to work with throughout my career. Either all software teams just happen to be awesome groups of people anyway (which I doubt), or I've been really lucky with the companies I've worked with! I genuinely look forward to work, and have met some fantastic people along the way. Not many people can say they look forward to going to work - and for that I'm very fortunate!

When counting up blog posts just now, I was expecting to see an increase, as I thought I'd blogged more this year - but it turns out that I'm down on last year! This year (including this post) I published 22 posts, against last year's 25. I'm still pleased though - as that's almost an average of one post every two weeks, which isn't bad given all the other stuff I do on top of this. Twelve of these have been the .NET Oxford write-ups, in which I've made sure I've written up all of our meetups, and try to go quite in-depth with each.

Whilst I started the blog because I enjoy writing, and I wasn't really expecting that many people to actually read it. But when speaking with people in conversations, it's always surprising how many people tell me that they do read them. Also when looking at Google Analytics, there always seems to be someone on there - which is great to see! So if you've got to here in this post - thank you for reading! :)

There's also been a few very popular posts - eg. my LINQPad Tips and Tricks series where I've seen really big spikes in my Google Analytics counters. Likewise with the write-up about Jon Skeet's visit to .NET Oxford, where he retweeted it to his 61,000 followers!

On the home front, both Jack and Mason are still growing at a rate of knots! This year has been Jack's first year in school! And Mason (who turned two this year) is now starting to talk a lot more. Other than that - nothing much has changed since last year! Love them to bits, even though they can be rather difficult at times!

As I mentioned at the start, I also turned 40 this year, and my wife Anna threw me a surprise celebrationary party, starting off at the Fishes where she had hired out the Tipi in the garden, and every time I turned around there was a different friend from a different walk of life there to surprise me! She's obviously been very busy for a while preparing it!

My only new years resolution really is to try and get back into learning the guitar. Other than that, I just want to keep on keeping on! In the latter half of this year, I've gotten back into regularly going to the gym - so hopefully will keep that up moving forward. I also want to keep up my blog at the same pace as I have this year.

Re. .NET Oxford - we already have a great line-up so far for 2019 - including some big names like Uncle Bob, and also a return of Jon Skeet! I'm not really seeing a big change in how we run .NET Oxford, as it seems to work quite well as it is.

I've also started doing quite a bit of reading on property investment. I haven't done anything like this before, so for the time being, I'm going to continue soaking up as much information by reading as possible - but who knows - maybe 2019 will see something in this space. Although, with all the unknowns around Brexit - it might be worth waiting. I'm just getting very aware of the shortcomings of pensions, and want to look into alternatives as soon as possible.

So a great 2018, and I've now finished for Christmas to spend some quality time with my family. I hope everyone has a fantastic Christmas and NYE, and I look forward to seeing you all in the new year!