Last week, I finally managed to get down to visit fellow .NET User Group .NET South East in Brighton. I'd chatted with organiser Steve Gordon quite a bit online, but hadn't yet had the pleasure of meeting him in person. He first got in touch with me last year after seeing my blog posts about .NET Oxford as he was thinking about starting his own .NET user group in his area.

Since then, which isn't that long ago at all - he's not only started .NET South East, but also been awarded a Microsoft MVP, started creating YouTube technical videos, as well as continuing to be a very active blogger. And if that wasn't enough, he somehow also manages to find time to contribute to the Humanitarian Toolbox charity project, which I'll be talking about very shortly! 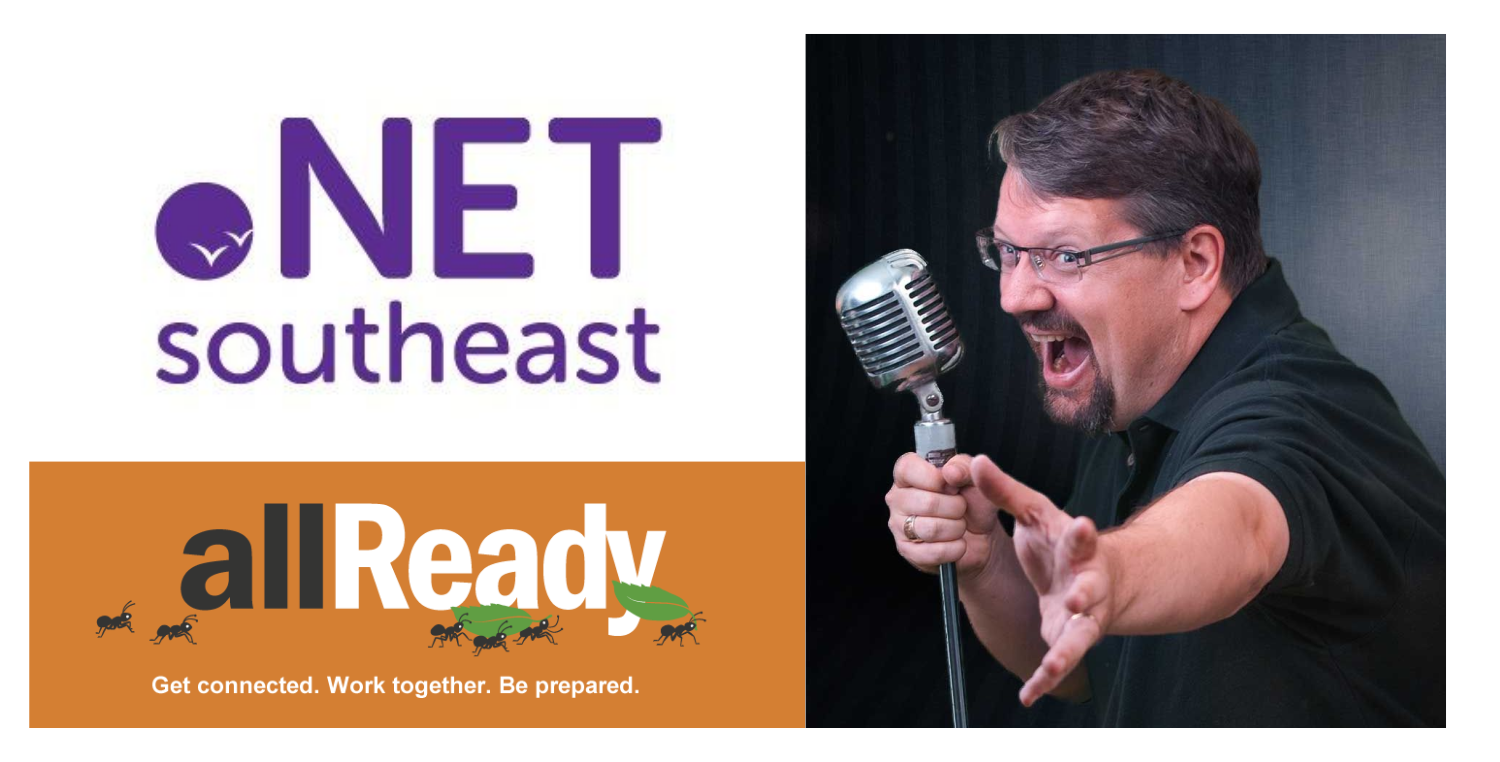 Over the years, I've been quite an avid podcast listener, with one of my favourites being the amazing .NET Rocks show. I have no doubt at all, that if it hadn't been for this podcast, I certainly wouldn't be where I am now. And I certainly wouldn't have started .NET Oxford! It's hosted by Carl Franklin and Richard Campbell, and has certainly been a very influential factor in my career. So, it took me quite by surprise when I saw that Steve had somehow managed to have Richard Campbell, not only come and speak at his user group, but also to help host a codeathon!

If I was looking for an excuse to make the trip down to Brighton to visit .NET South East - I actually now had quite a few! It was a weekend, so work didn't get in the way for a change; there was the codeathon which sounded quite fun, and was of course for a good cause; and Richard was doing his talk on the History of .NET! And of course, an opportunity to meet both Steve and Richard in person. So, after grovelling to my wife Anna, I then booked my hotel and train ticket, and made the trip!

As I get the train to and from the offices of my primary contract - I booked my tickets to go straight from the Twyford train station. Unfortunately, the route look me via London, and involved a bit of time on the Tube. 'Chaotic' really doesn't begin to describe it! I really don't know how people commute on the tube every day - it would drive me insane! It certainly made me appreciate how luckily I am with my commute, which whilst fairly long, does involve empty-ish trains, and a table I can use the laptop from, and a nice walk on the other side.

I arrived at the hotel in Brighton around 8.30pm, and decided to make it an early one given the full day planned the next day...

I woke up fairly early, and wandered up to the local Starbucks ...

I then met both Steve and Richard in the lobby of the hotel, and we walked around the corner to the Madgex offices where he works. Madgex very kindly sponsor .NET South East, and it's in their office where the meetups are always held. They also kindly hosted the codeathon. 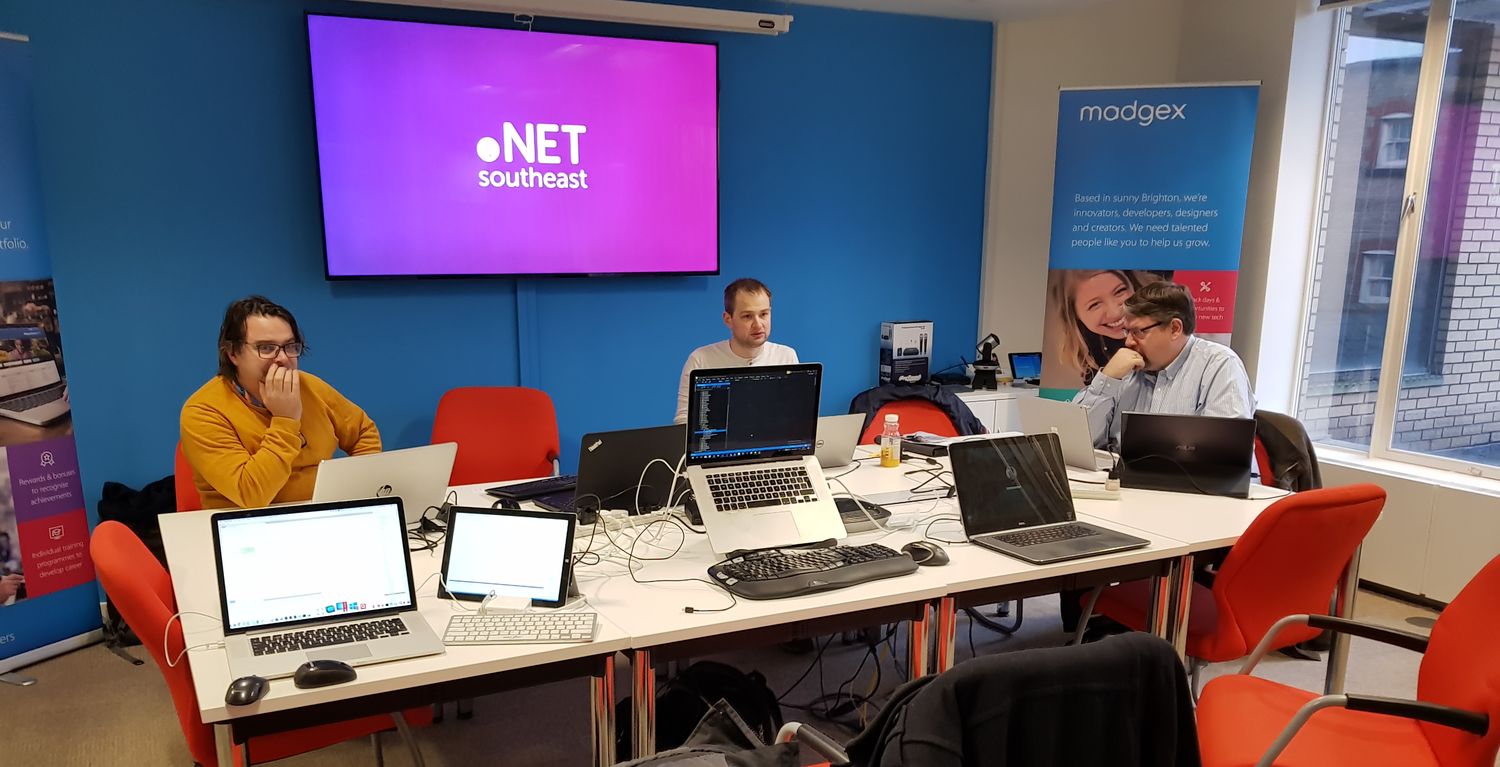 The room quickly started filling up with developers. We all set up our laptops, ready for the codeathon to begin. Steve gave a quick introduction, before handing over to Richard for a longer intro to how the Humanitarian Toolbox came about - and more specifically, the allReady project, which is what this codeathon was all about. Following which, Steve then discussed the project's tech stack and explained a few processes around the GitHub issues and submitting pull requests.

Steve had in-advance picked a bunch of GitHub issues from the project, and assigned them a label called .NET South East Codeathon. These were issues he thought were suitable for the day, and for developers who didn't really know the codebase. These issues were then reserved for the codeathon.

This was actually my first ever codeathon, and it was really interesting jumping into a codebase with a group of people who hadn't worked together before, and where we were all completely new to the codebase. Whilst obviously there were developers there with different backgrounds and at different levels - there was one big theme ... everyone there was passionate about software development to the point that they wanted to spend their Saturday coding, even though each of us had already spent a full week coding at our various workplaces. Having a room full of this kind of developer, was a really great way to not only contribute to open source, but also help contribute to a fantastic charity project which actually saves lives.

Everyone had already downloaded and ensured the project ran on their machines prior to the event, so it started quite smoothly with everyone getting their heads down quite quickly. A lot of the issues were UI related, as these were easier for first timers to pick up. I started off with an easy one, adding social buttons to the Event detail page.

At lunch, Madgex kindly provided pizza. Unfortunately, due to my food intolerances, I'm unable to eat pizza, so decided to walk into town to grab sandwiches. It was also good to stretch my legs. I walked to the tesco across from the hotel, and also stopped at a juice bar on the walk back. I really must visit juice bars more often, as the smoothie I got there was delicious!

When I got back, I joined in the mingling and general chit-chat - before we all started the second half of the codeathon!

The codeathon was wrapped up at around 5pm, and we ended the day with 30 pull requests in total! Which is pretty impressive given that most people there didn't know the codebase, and there was also plenty of conversations that sprang up throughout the day.

After the codeathon, Madgex kindly provided plenty of food and drinks for everyone, and we were all entertained by stories from Richard - mostly involving discussions about fusion power, which Richard certainly knew a lot about after doing a lot of research for the .NET Rocks geekout shows!

Richard Campbell: The History of .NET

The second event of the day was the .NET South East meetup itself. More guests started to arrive, then once ready and everyone was seated - Steve started off with his intro talk. He summarised who and what .NET South East were all about, covered a few news items, then handed over to Richard. It's always interesting seeing how another user group structures their meetups. .NET South East actually felt very similarly done to how we do .NET Oxford. Perhaps with the exception that they do their prize draws at the end rather than the beginning. 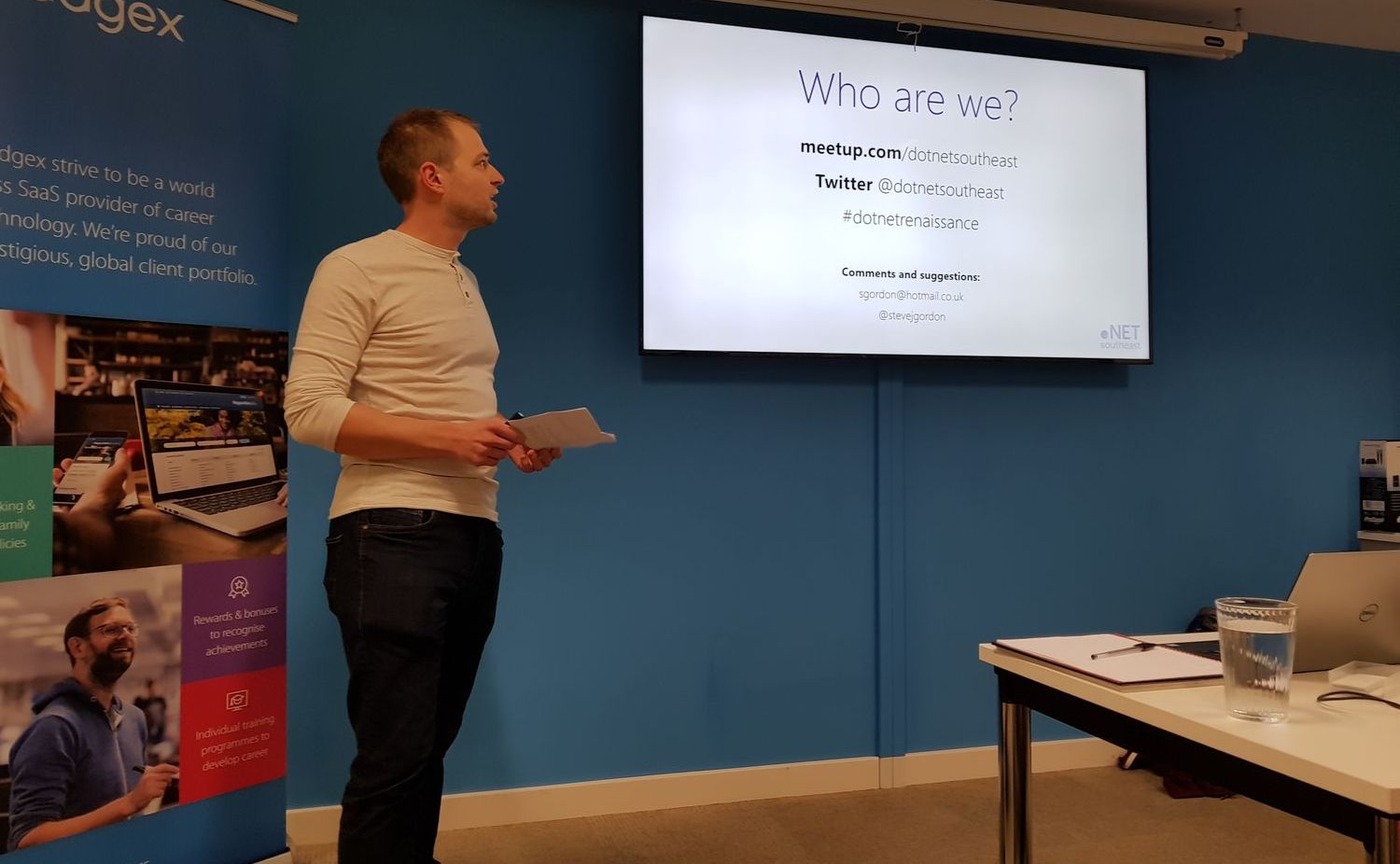 Steve then handed over to Richard. One thing I've always been impressed with when listening to Richard on .NET Rocks, is his incredible memory and story telling skills. There was so much content and attention to detail crammed into his very in-depth talk, and he barely once had to refer to his notes. A very animated talk, and clearly a topic that Richard is quite passionate about. I'm not going to begin to try and cover the content of his talk - I would literally have to write a book to do this! And luckily, I don't need to - as this is exactly what Richard is doing! He's been very busy interviewing key people in the industry who have been involved in the history that led up to what .NET is today, and it certainly showed! I for one, will definitely be buying his book when it becomes available. He said he's aiming for a release date near the end of 2018.

A version of his talk from the NDC Conference is also available to watch online. 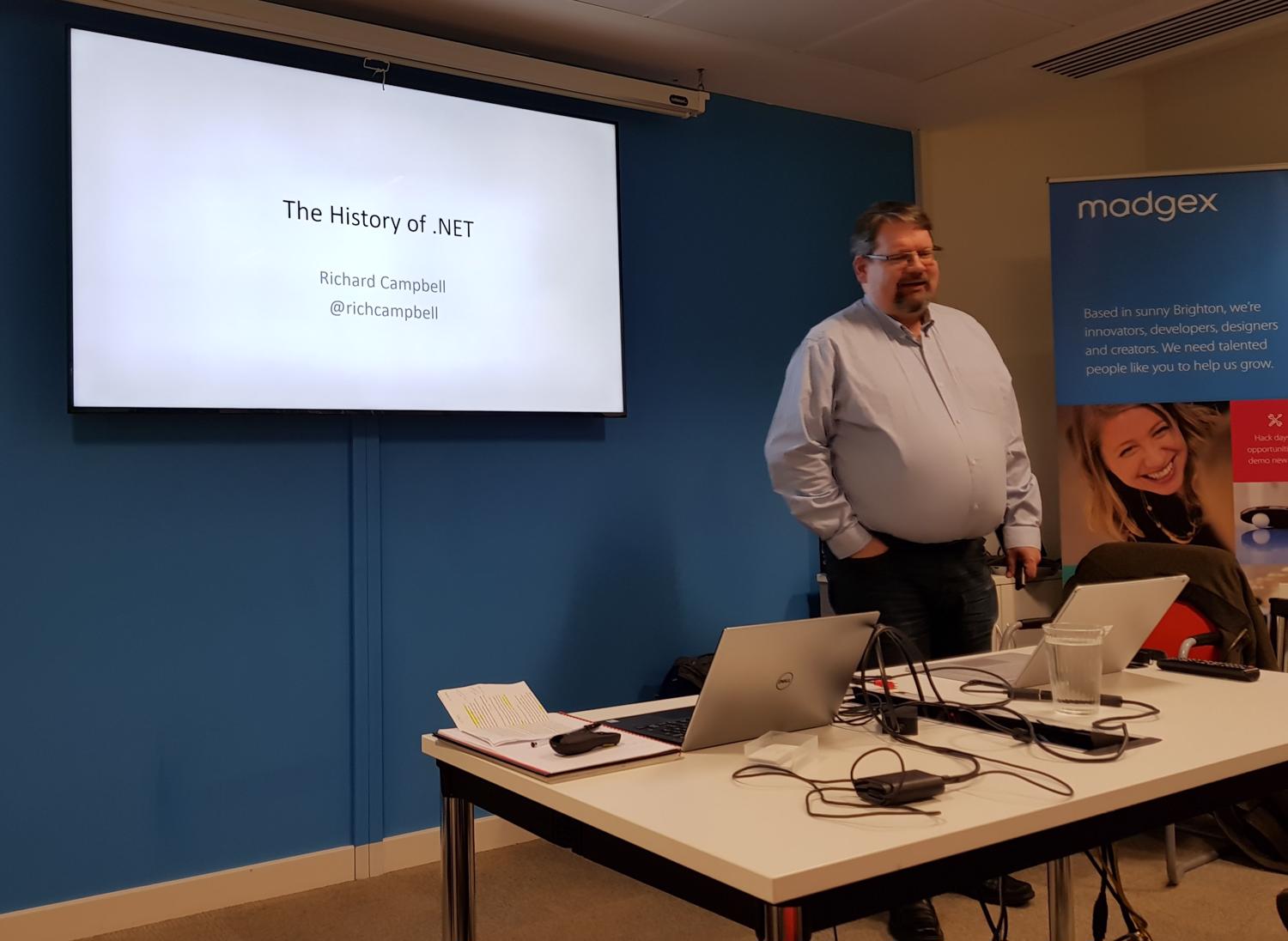 After Richard finished his talk, Steve then wrapped up with the prize draws. He actually uses my WPF Prize Draw app that I wrote for .NET Oxford. Albeit a very old less aesthetically pleasing version unfortunately! It is really nice when you spend time working on an open source app seeing it actually being used by other people. It really makes the time spent more worth it.

First thing on Sunday, I repeated Saturday's Starbucks visit, then decided to visit the gym next door to the hotel before making the journey back. This time, I managed to get a train route that avoided the Tube, so it was a bit more relaxing a return journey.

A massive thanks to Steve, Richard, and Madgex for a fantastically well organising event! A thoroughly enjoyable weekend had by all!