Last year, whilst browsing the web on my phone, I learnt something that blew my mind. I can't remember exactly what (or why) I googled about 'visualisations', but some of the results said things like "Did you know that some people can't see images in their mind's eye?!". I read that, and thought - "Wait? What! Some people can?!".

So it turns out that ~3-5% of the population have something called Aphantasia, which means they have a blind mind's eye. There's also some research that suggests that people with Alphantasia are more likely to get into a career in IT - meaning in our industry, the percentage could well be higher. So this post isn't completely off-topic!

Based on those stats - most of you reading this will be surprised that some people can't see things in their minds eye...

But some of you will be reading this, and be as blown away as I was. After all - how we percieve our thoughts isn't something that crops up in every-day converstion. I'm in my 40s, and have only just learnt that other people can see images in their heads. There must be so many people out there who, like me, have Aphantasia but don't know it. This is the purpose of this blog post - to raise awareness of it. I'd love to hear your experiences in the comments - especially if you've only just discovered you have Aphantasia!

In a recent podcast episode about UX, I mentioned about my Aphantasia, and coincidentally enough, the guest said that she also had it too. And also a listener, who I also know through .NET Oxford, Tweeted...

Listening to @dracan podcast I found out I have Aphantasia. Had no idea this was a thing.

Since then, I've chatted quite a bit with Tom about this. We've both wondered if developers without this use their visualisation to help them with coding. If you're a non-Aphant programming reading this - I'd love to hear your experiences about this.

Do you have Aphantasia?

If you read the next sentence, but don't read any further until you've tried what it says...

Close your eyes, and imagine a ball on a table. Imagine pushing the ball off the table, and it falling onto the floor.

I'm assuming you've now opened your eyes again, otherwise you wouldn't be able to continue reading this! :) What colour was the ball? What colour was the table? Describe both. From what I've read, most people with Alphantasia would probably say that it didn't have a colour (that would be my answer). For me, whilst I can imagine it - I can't actually see anything, and I didn't even concider that it would have a colour.

Another common test is to just try and imagine a red star in your mind's eye. Which of these is closest to what you see?... 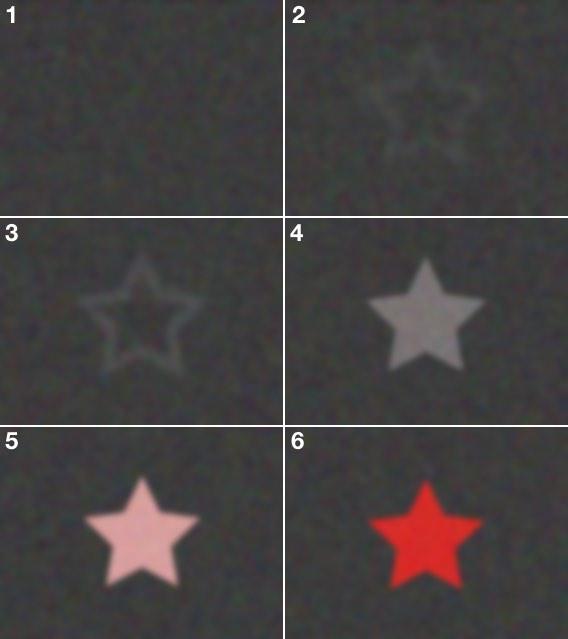 And here's another one...

Think of a horse 🐴

How do I imagine things then?

Let's pretend the word 'imagine' doesn't derive from 'image'! If I imagine that I'm, for example, at my parents' house - I still have a mental model of the scene. I have a position in the scene, and walls/objects also have 3-D positions in that mental model. I just don't see anything. No colours. No edges. Nothing. Chatting with my dad, he doesn't understand how I can imagine scenes, without being able to see them. It's at this point that I realise it's very hard to describe what I experience. The closest word I can find to describe it is that it's a feeling of the scene. Albeit, a very spacial feeling. It's a conceptual mental model.

Is this a disability?

When I first found out about this - I felt like I had just discovered I had a brain disability and my brain wasn't functioning properly. Everyone else has this super-power that I hadn't even known they'd had.

However, the more I read about it, and the more I speak to other people about what they experience - the more I realise that this isn't the case. Everyone's brains work very differently (much more so than I had ever thought). Speaking with my dad, it sounds like his thoughts are very dependent on his being able to see stuff in his mind's eye - which feels very limiting to me. Speaking with my brother - who is on the oppositive end of the spectrum having Hyperphantasis (see below), he says he hates it and wishes he was like me. I've never understood meditation, and never needed to. Perhaps having a quieter mind is the reason why.

"Sounds like Sydney uni are doing lots of research into it. One professor said he thinks he could make someone visualise with stimulation and training but comes with the cost that you couldn't undo it once you acquire visualisation. I wouldn't want to change the more I think about it."

I think I agree. I suspect that the difference is much more than just seeing vs not seeing. And it's more that the way different people think is fundamentially very different. I'm not sure I'd want to mess with that! But, I'd love it if there was a magically way to experience it, but revert if I didn't like it.

I mentioned above that my brother is on the opposite end of the spectrum. And it sounds like my eldest son also has this. Basically people with Hyperphantasia have extremely vivid mental imagery. Apparently this is more common than Aphantasia, and has been described as as vivid as real seeing. (wikipedia)

Whilst Aphantasia/Hyperphantasia refers to the minds eye. It turns out that other people can also experience sound, smell, taste in their mind too. Sadly, I don't have any of these. I can sort-of hear my own inner voice (although, I wouldn't describe it has hearing exactly, but it's certainly using the spoken language). If I have a song stuck in my head, it's my own inner-voice humming it. My mum says that if she thinks of a song, she actually hears the artist's voice singing it. A friend, who's a fellow guitarist, who also has Aphantasia, says he can hear music quite vividly.

I wonder how people sleep at night with all these sights and sounds going on in their mind!

I'd love to hear you experiences!

I find this topic of conversation fascinating - and since finding out about this, I've quizzed lots of different people about their experiences. Regardless of where on the spectrum you are, I'd love to hear how you experience your thought!