On Tuesday evening we had our third .NET Oxford, and even despite the heat it was yet another great event! Whilst not quite our usual turnout due to the very hot weather, it was still pretty good! Luckily for those who did attend, our sponsors Corriculo Recruitment were on hand doing an amazing job as usual with plenty of refreshments - both the alcoholic and non-alcoholic variety! Personally, I think I drank enough of their water for everyone! It was so hot!!

Out of all of the topics I wanted to cover at .NET Oxford, Xamarin was most certainly near the very top. So I was very excited to actually have someone from Xamarin (now Microsoft) here doing a talk on it!

Initially the talk was going to be by Mike James - unfortunately though, his work informed him a couple of days before that he had to be in Norway on the day! Thankfully, clearly not being the type of person to let people down, he made sure (before even telling us he couldn't do it) that he'd found a colleague to take his place. So a massive thank you to both Mike, and especially to Michael Sivers for stepping up at incredibly short notice and doing a fantastic job telling us all about Xamarin mobile development!! 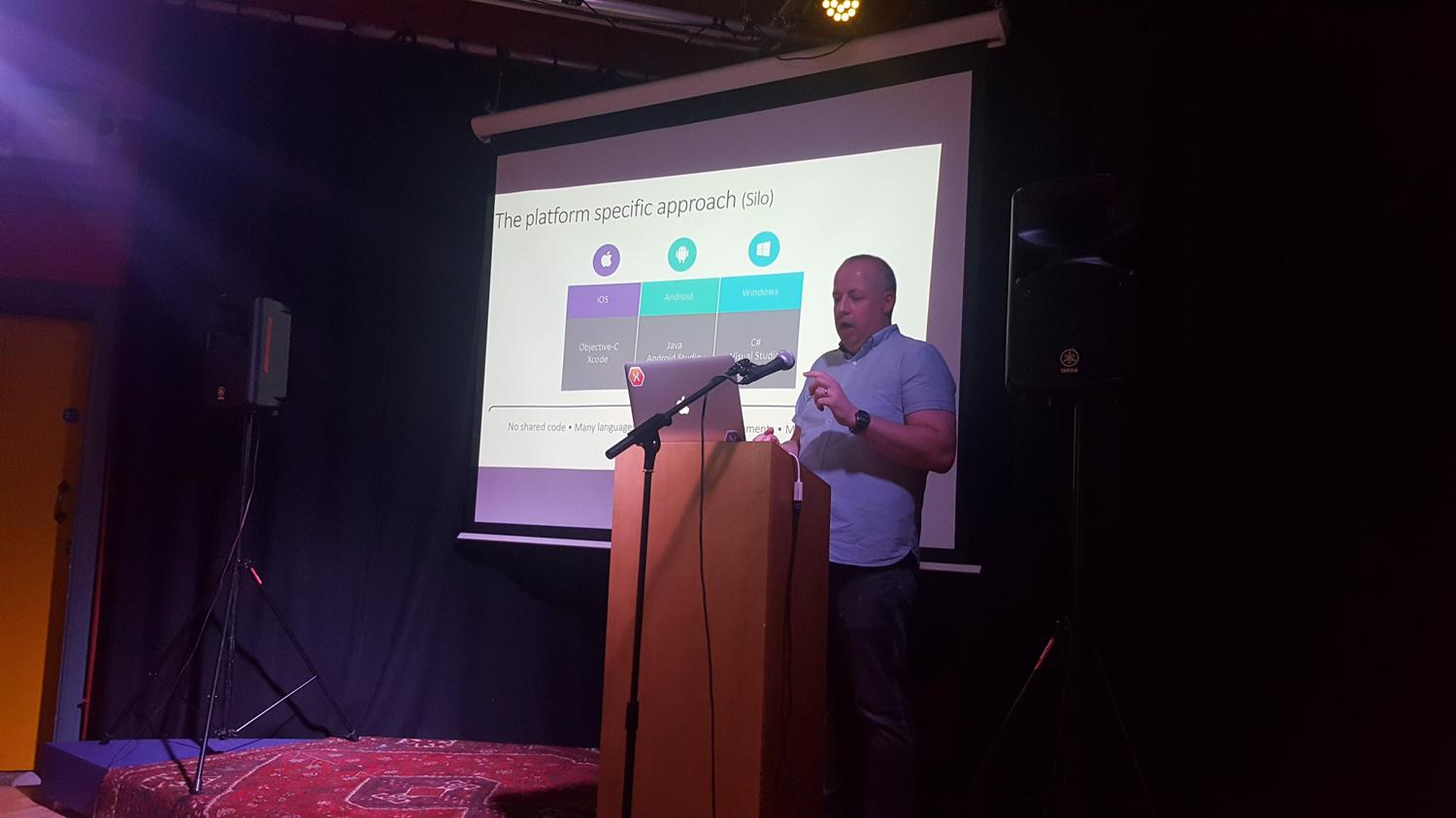 Michael's talk started off explaining what Xamarin was, and describing the differences between native mobile applications (which Xamarin apps are!), and hybrid app frameworks like Cordova. He also talked about the performance of Xamarin, and showed various benchmarks demonstrating that Xamarin is just as fast as true native apps, and in some instances even faster thanks to things like .NET's async/await!

Michael also discussed both Xamarin 'Native' and Xamarin Forms, showing us code examples, and talking a lot about using the MVVM pattern to architect our Xamarin applications.

It was clear that his talk had a lot of interest from the audience by the number of questions! The question of MVVM libraries was one I was planning to ask, but someone beat me to it! The most common libraries are MVVM Light and MVVM Cross, which were both asked about. However, Michael recommended just using the inbuilt MVVM functionality that was designed specifically for Xamarin.

A great talk, and at such short notice too! A really big thank you again to Michael for doing what he did, so that the show could go on! 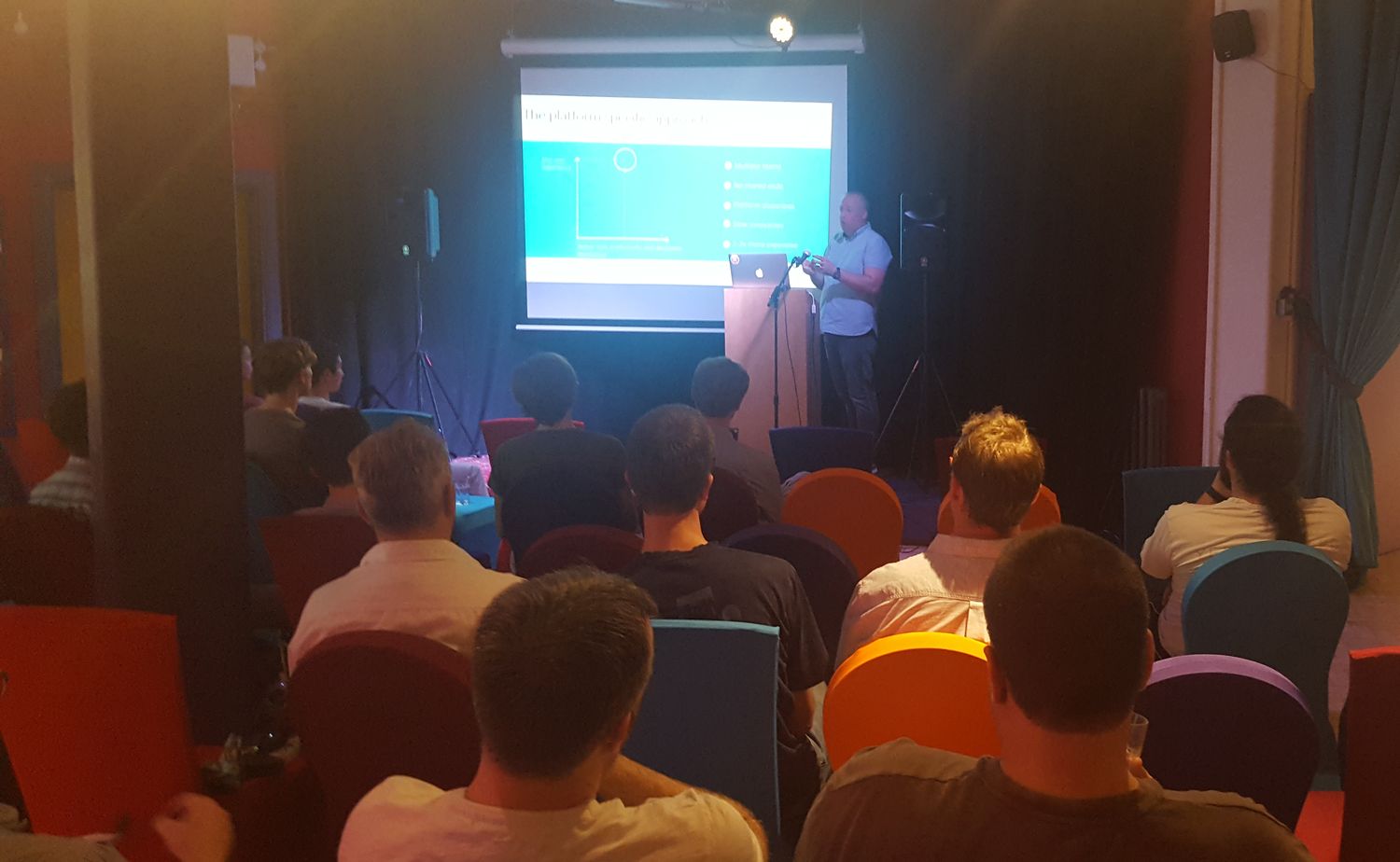 As mentioned in the intro talk, we're very excited to announce that we'll be moving to a new monthly schedule! It's actually been 3 months since our last event, and it's been clear that this was WAY too long! So we're going to attempt a new monthly frequency! This is just an experiment at first to see if it works, but providing we keep up the interest and attendee levels we've had so far, then this feels a much better turnaround for everyone. 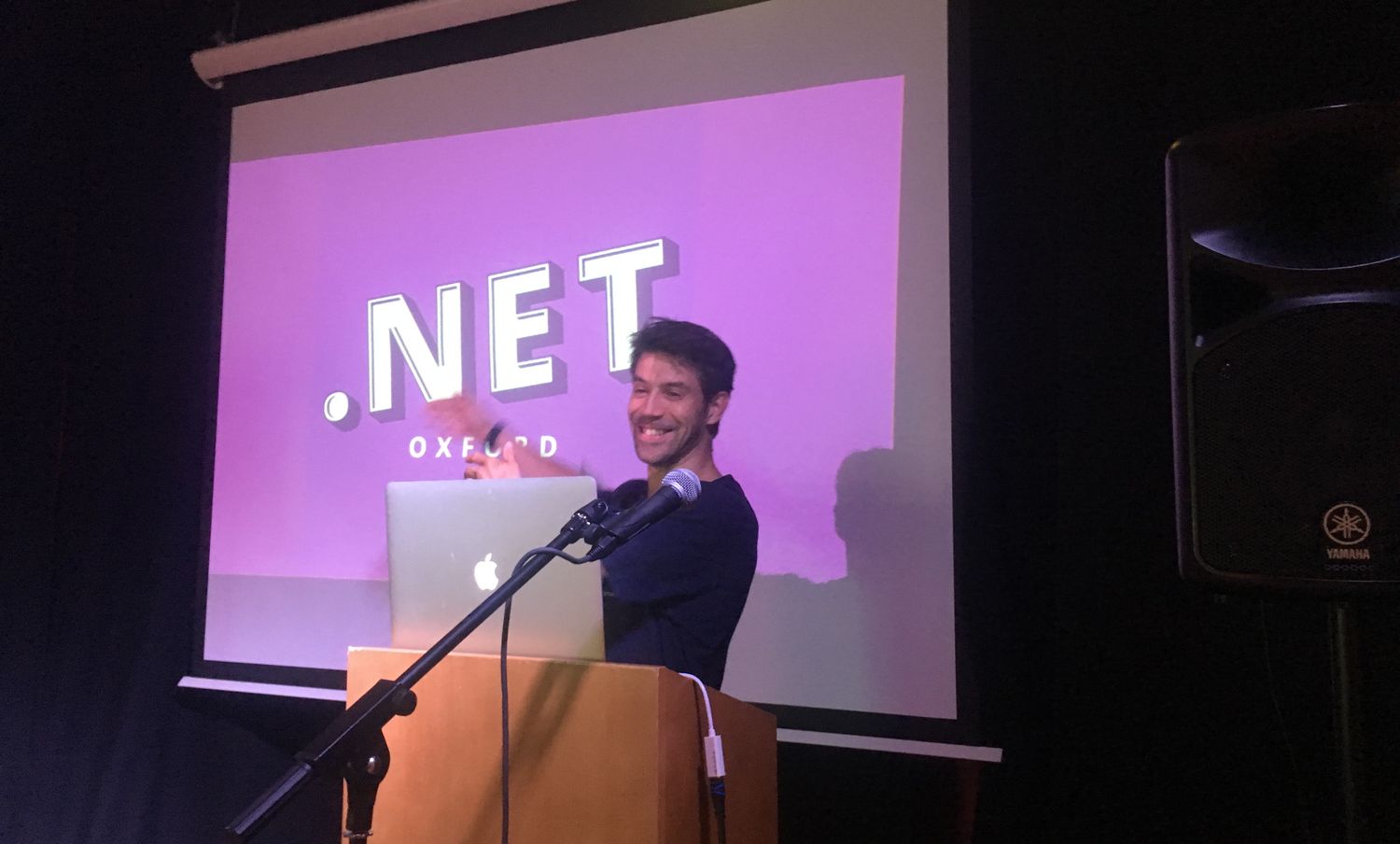 As part of announcing the new monthly schedule, we also let everyone know about next month's meetup, which will be a slightly different format for a change. We're planning a lightning / grok talk event - which will allow more people to get up on stage and talk about something! These will be 10 or 15 minute slots.

The intro talk this time took a bit longer than usual due to the large number of news announcements made at the recent Microsoft Build conference! Obviously I couldn't cover every announcement, so instead I picked the big ones that stood out to me, and that I felt most relevant to the user group.

Below is a list of the items I covered, with links to the further details ...

After the news section, we then moved onto the prize draws. This time giving away 4 prizes! ...

We recently had a discussion with Jetbrains and they've kindly allowed us to giveaway a licence to any of their amazing products at each of our bi-monthly events! As mentioned above, we're now moving to a monthly cycle, so this means that each other event - we'll be able to give away one of their products! Being MASSIVE Resharper fans, we'd obviously recommend this to the winner if they didn't already have it - but Jetbrains also have a good number of other products to also choose from.

A huge congratulations to our winner this month, Matt Gadd!

Another one of our regular giveaways is kindly provided by Manning Publications! The winner can choose an ebook of their choice.

The winner this month was Dave Newman, and he chose Xamarin in Action, which clearly shows the interest that Michael's talk prompted!

Oz-Code very recently got in touch a few days before the event. They had seen my tweet to the author of LINQPad asking if I could do a giveaway in my lightning talk that I'm doing next month (which he said yes to btw!), and very kindly offered an OzCode licence to giveaway at each one of our meetups! We are finding that we're having to limit the number of licence giveaways from difference companies at each of our events to avoid spending too much time doing prize draws. However, I've used OzCode before. And it's awesome. So it didn't take too much persuasion!

If you haven't seen Ozcode in action - it's basically a Visual Studio extension that puts your debugger on steroids! I can't really do it justice here with text, so instead, check out the animated gifs on their feature page which should give you some idea! Especially notice the LINQ debugging!

The lucky winner of the OzCode license this month goes to Daniel Hall!

The final prize draw was actually a re-giveaway from our last meetup. The winner of the Elmah.io at our last event was Tom Robinson, and he very kindly said the he didn't really have a use-case for it, so said he was happy for us to re-give this away. This time, the winner of the license was Andrew Withers!

As always, our amazing sponsors Corriculo Recruitment did an incredible job with all the refreshments and making everyone feel welcome. And not forgetting the venue costs too! Given the immense heat, I don't think the refreshment they provide have ever been more appreciated!

I'd also like to thank them for their support with our move to the new monthly frequency. This move obviously adds more cost, both financially and their time - but as usual, they've been incredible supportive. Corriculo really are one of the .NET Oxford team - not just a sponsor.

Wrapping up and the pub!

It was over to Matt to wrap up the session, where he thanked Michael again, thanked everyone for putting up with the intense heat, and also reminded us about our two upcoming meetups (which should hopefully be announced officially in the next day or so!). Then most importantly, he directed everyone to the pub! ...

It was quite a good turnout at the pub afterwards, with many VERY nerdy developer conversations taking place! Ranging from Git to design patterns. We're all nerds here - so that's fine by us!!!

Really looking forward to seeing you all at our lighting talk next month! Don't forget that if you're interested in doing a 10/15 minute talk - do get in touch!