After the success of our last lightning talk event in July - we decided that it was about time for another one - proving that lightning most certainly does strike twice! And like the last one, it was fantastic seeing the variation and community-feel that the lightning talk format brings. 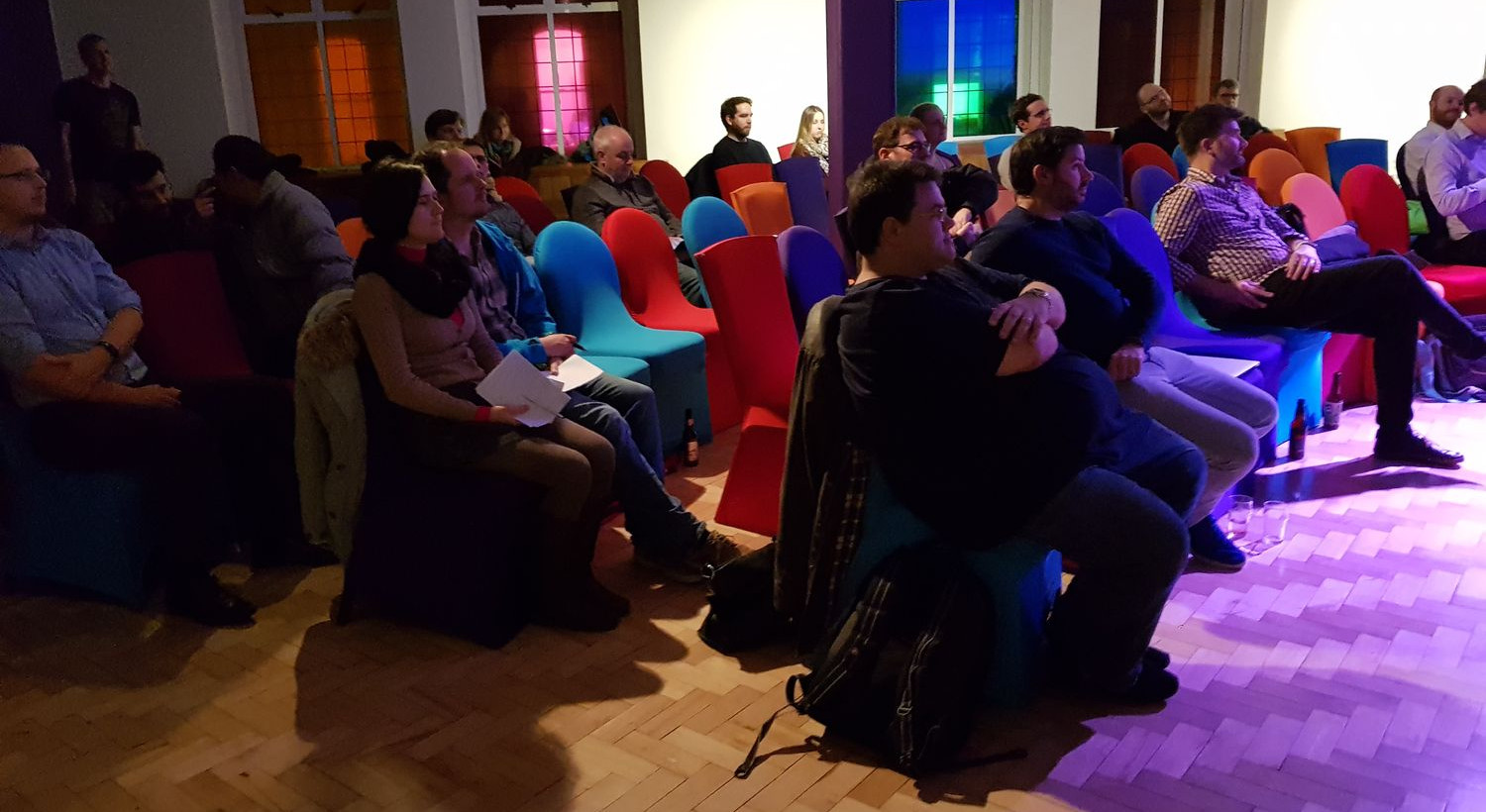 This time, the intro talk was done by Matt, allowing me time to prepare for my lighting talk rather than having to focus on the intro. He did a fantastic job - and was even brave enough to take on my Prize Draw app! It was with great relief that it didn't break horribly on him!

We had our usual three prizes from our awesome prize draw sponsors...

Congratulations to Russ, who took away a year-long Jetbrains product licence of his choice. Whilst he could have chosen any of their fantastic products, he decided to go with the obvious Resharper! Hopefully my productivity talk might have had something to do with that choice?!

Congratulations to Nick Crisp, who won a Manning eBook of his choice!

Congratulations to Alex Garfitt, who won the Oz-Code licence! If you haven't used Oz-Code before, it's a Visual Studio extension that puts your debugger on steroids!

As usual, our awesome Primary sponsors Corriculo Recruitment were on hand, not only covering the venue and drinks, but also helping us out a lot on the night too. And this time, they even joined in and did a lightning talk! See Megan's section below.

If you're a developer looking for your next role, or a company looking for .NET developers - then definitely get in touch, and remember to mention .NET Oxford!

The first talk should have been by Zoltán, telling us all about turning software into computer chips. This was a remote talk - the very first one we've ever attempted. Sadly, it was not meant to be. Before the event, we tested this out on the venue's wifi, but this turned out to be way too slow for Skype video. So I tried tethering to my phone using 4G, which actually worked! So we signed off until the event started, but when we tried to connect again shortly before he was due to do his talk - for reasons unknown, it refused to connect. I still had 4G on my phone, and we could talk via text on Skype - but it just wouldn't connect to video. I even tried a quick reboot. As the event had actually started by then, we eventually had to give up - as I had to focus on the event itself.

Such a shame, as I was really looking forward to Zoltán's talk. And I obviously hate letting people down - both the attendees, and also Zoltán himself, as I know how much work goes into these prepping for these talks.

I'd like to say a big thank you to Zoltán for at least trying to do a talk at our meetup! On the plus side, a longer version of his talk can be found on the Channel9 website where he did a remote talk at the .NET Conf this year!

This was my talk, which was all about developer productivity. I've written a full blog post on this talk, which can be found here.

To summarise though, it was broken down into the following parts ...

This was a 20 minute talk, and it's surprising by how quickly that 20 minutes goes. Whilst the first two sections went as planned, I unfortunately had to rush the ReSharper bit of the tools and automation section and skip quite a few of the ReSharper functionality demos, which was a big shame, as there was a lot more features I had planned to demo. In my last lighting talk on LINQPad, I timed myself doing the full talk quite a few times, and had the time planned perfectly. This time, I unfortunately hadn't got the timing quite right. All part of the 'public speaking' learning curve though!

".NET in the Local Area" with Megan Robertson

Next up was Megan Robertson from our sponsors Corriculo Recruitment - telling us all about the state of .NET development in Oxford.

She mentioned to me beforehand how nervous she was, but that certainly didn't come across in her talk! She covered quite a bit, starting off introducing both herself and Corriculo Recruitment, and then moved onto talking about the current .NET development landscape - both in the permanent and contract space.

The main takeaway was that now is a fantastic time to be a .NET developer. I've said this many times from a "so many awesome technologies to play with" point of view, but Megan was coming at it from a "developer demand" point of view - and it sounds like there's an awful lot of demand. Companies can't find the talent, so as I discussed in my talk - if you're a developer that's willing to actively learn - the World (or Oxford?) is your oyster! Megan also discussed some of the benefits companies are offering to try an entice developers, proving this point even more!

Corriculo are our primary sponsor, and if you'd like to speak to them about your next role, their details can be found here on their website. Please remember to mention .NET Oxford if you do :) 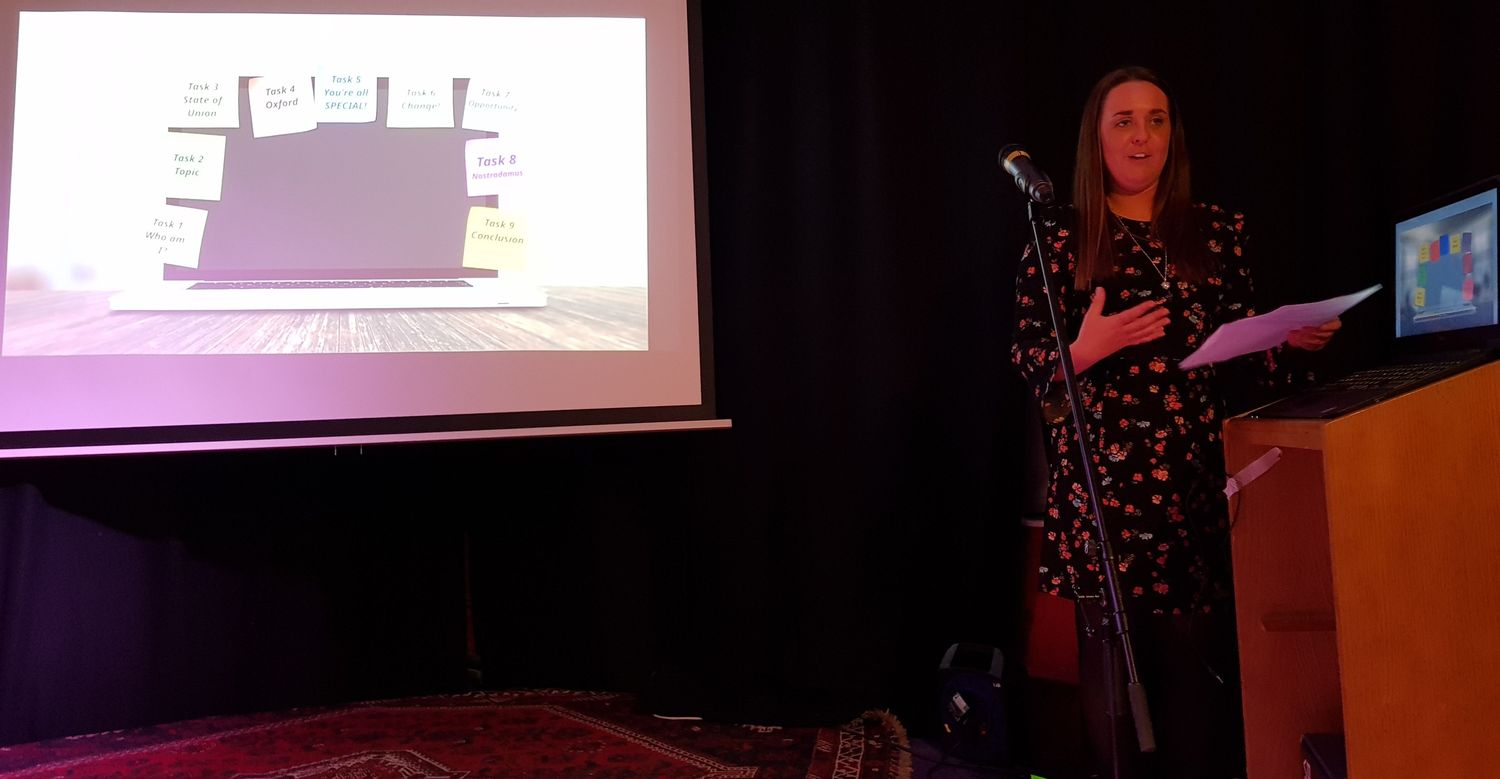 "Documenting APIs with Swagger and Swashbuckle in .NET Core" with James World

James is one of our most involved regulars - not only in attendance, but also having spoken a couple of times previously - both at our last lighting talk meetup, and also doing a full length talk on Reactive Extensions back in September. I've spoken to him a few times now at the pub after our meetups, and he certainly knows his stuff!

This time, he spoke about Swagger, and using Swashbuckle to add Swagger to ASP.NET Core APIs.

Whilst, I've heard of Swagger before, and have been meaning to try it for some of my APIs - it's something I just haven't got around to playing with. After watching James' demo, and seeing how easy it is to get something up and running, this has definitely now been moved higher up my list of things to play with!

The importance of Documentation is something I covered in my talk - and given how easy this makes documenting your APIs, this is pretty compelling! 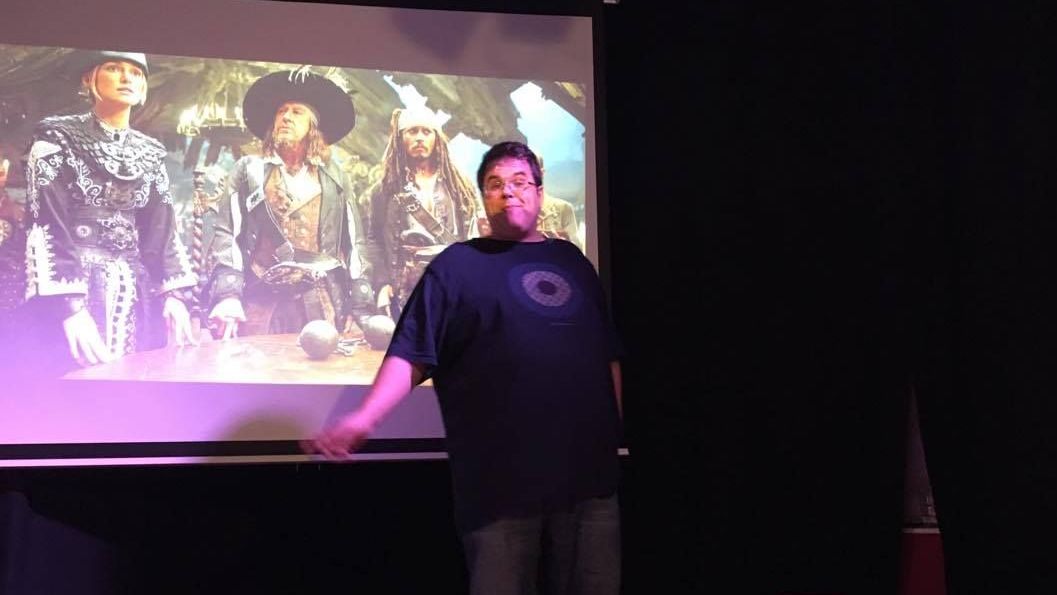 Stuart is another repeat speaker at .NET Oxford - and was also our first ever speaker! He spoke at our very first event in January about containerizing .NET Core webapps with Docker!

This time, his talk was all about PowerShell. A very large topic to cover in just a 20 minute lightning talk! Stuart completely blew my mind with his talk - not only in content, but also in the way it was delivered. I really enjoyed his approach to using slides to demonstrate code - building up code using slide fragments, quickly switching with a clicker you barely noticed he was using. Very fast paced, but also extremely clear and concise - providing something for everyone - explaining both the fundamentals of PowerShell for those who hadn't used it - but also teaching daily PowerShell users like myself a thing or two!

After the slides, he switched over to demos, demonstrating using Azure PowerShell to deploy to Azure, and also showing off his own open source PowerShell modules - posh-azure and posh-HumpCompletion to make working with Azure from PowerShell even more productive! 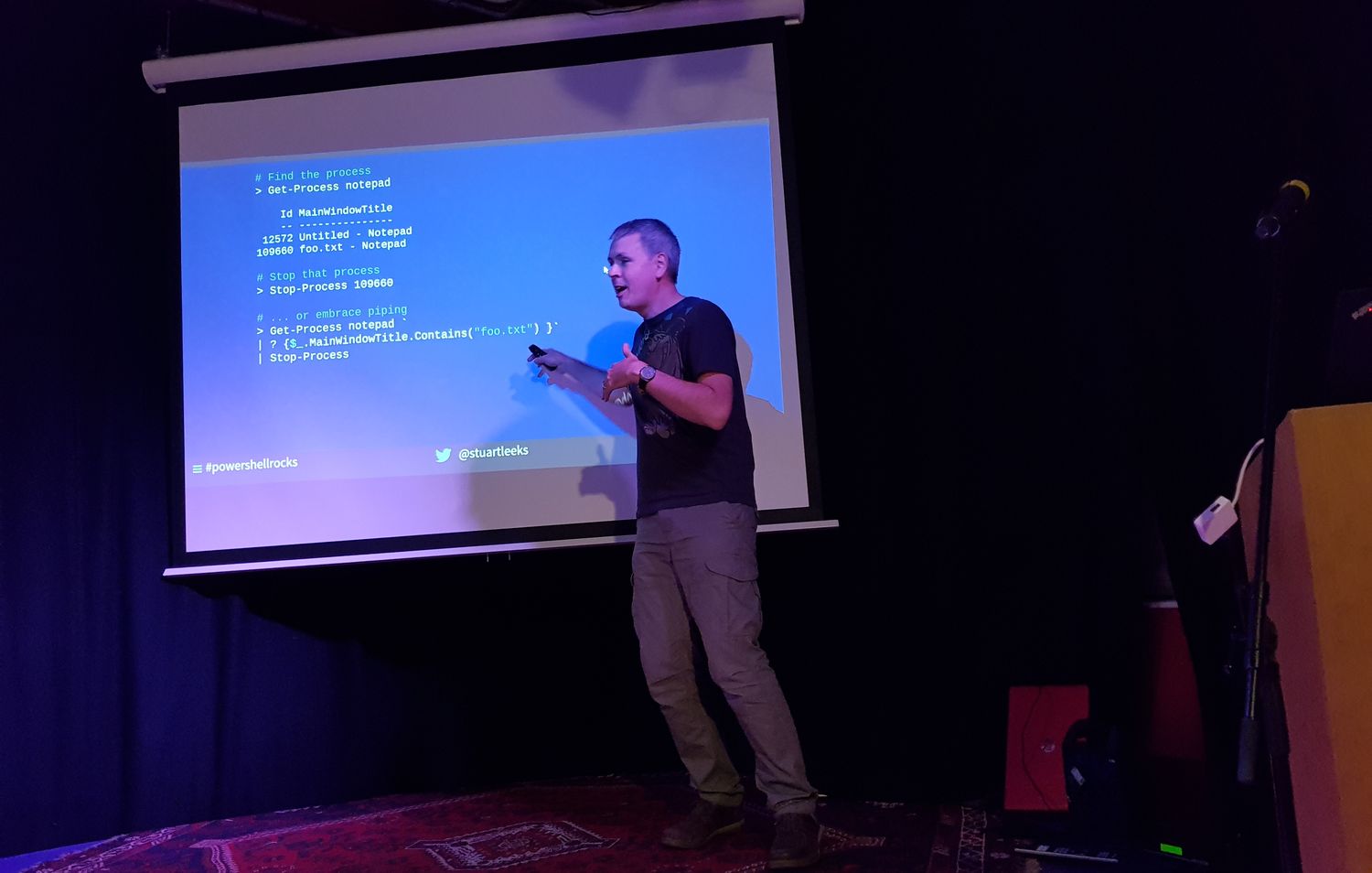 "Cake: The Good, the Bad and the Frosty" with Timothy Boyle

The last talk of the night was by Tim Boyle, talking about the Cake build automation system. I'm personally a massive fan of Cake (both kinds!), and it was great having a talk on this. Coincidentally, I've even recently written a blog post about it (sorry about the shameless self-plug there!).

As Tim's talk title suggests, he broke his talk down into three sections. Starting off with the good - which Cake has a lot of! Then mentioning a few bad bits, which are actually no longer bad bits! As Tim pointed out, a few days before his talk, a lot of the things he mentioned are now non-issues. One example is intellisense, which has now been added to their vscode extension!

Tim's last section is something I hadn't actually heard of. Frosting allows you to write your build scripts as portable console applications. Whilst, I can't picture a use-case where I'd need this - it's certainly a useful thing to be aware of.

Finally, Tim rapped up by making an announcement for us! In February, we'll be having Gary Ewan Park, one of the main Cake guys down also talking about Cake! Coincidentally, when Tim suggested doing his lightning talk on Cake, I was already in discussions with Cake guys about speaking next year. This hasn't been announced on Meetup.com yet, but I should be creating a Meetup event for this very soon! 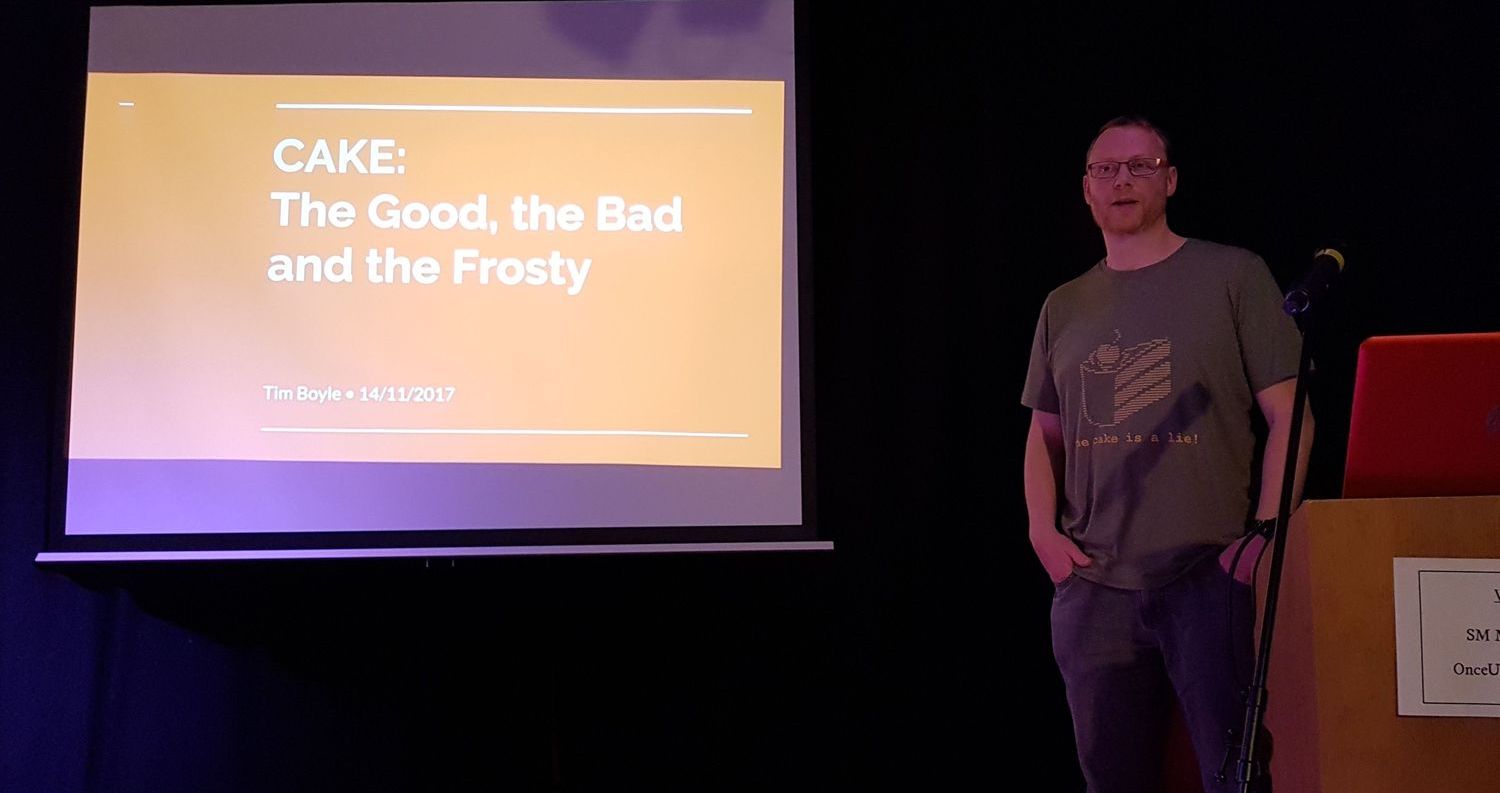 December 5th: ELK with Docker, and Kubernetes for .NET Developers

The next meetup will be on the 5th December. The main focus will be on the Kubernetes orchestration platform, which we have Shahid Iqbal down to talk about. You can hardly turn around at the moment without hearing Kubernetes mentioned - so I'm really excited that we'll be covering this.

I'll also be doing a talk on playing around with the ELK Stack with .NET and Docker. As Shahid's talk mainly focuses on Kubernetes, and assumes a prior knowledge of Docker from the audience - my talk will give a basic introduction to Docker and Docker-Compose as a pre-requisite.

Unfortunately, for this one event, we'll be downstairs in a smaller room with limited availability. The larger upstairs room we usually use at Story Museum is unavailable throughout December due to Christmas events. The maximum occupancy of 40 has now already been filled, but Meetup.com allows you to join a waiting list if you haven't RSVPd already.

Please remember to update your RSVP if you have RSVPd but can not longer make it - otherwise you're stopping someone else on the waiting list from attending.

Due to this limited availability, whilst we're normally quite relaxed with checking RSVP on entries due to the large occupancy of the upstairs room - this time, I'm afraid, we will have to check RSVPs on entry.

Being our December event, it'll be a Christmas theme. With our amazing sponsors Corriculo Recruitment providing Mulled Wine and Minced pies! There will also be really cheesy Christmas music. I apologise in advance!

Finally, on to the Pub!

After Tim's talk, I wrapped up by mentioning our next event (see above), and then pointing everyone in the direction of the The Royal Blenheim pub - our usual post-meetup regular, for further drinks and chat!

Matt unfortunately had to rush off and skip the pub this time as he had to drive straight up to Leeds for work after the event. I believe his arrival time was in the early hours of the morning! That's dedication for you!

We had a good attendance at the pub, and a few new faces too! There were also a few new ideas for talks for our next lightning event! In discussion with Stuart, we agreed that I'd do a talk on Vi (something that he wants to learn), and he'll do a talk on OneNote (something I've asked him about in the past). I also got chatting to a new attendee (also called Dan, so easy to remember!), who's interested in speaking too. So now, we need to plan the next lightning talk event! It's looking like it'll be mid-next year now though - as we have a lot of exciting stuff planned in the upcoming months!