Every so often I get the urge to find a new programming font. The pattern tends to be... I look for a bit, can't find anything I really like, then go back to the stock Consolas. About a year later, the same thing happens again. Then back to Consolas. And so on.

However, about a month ago - the last iteration of this was slightly different! I tweeted out the following tweet ...

What's your favourite programming font? I normally use the stock Consolas, but got the urge for a change!

A few of the replies raved about a font called Fira Code! At this point, I had already tried a few others, and was getting ready to go back to Consolas again - until I installed Fira Code, and immediately loved it!

Forgetting about this very cool thing called "ligatures" (which I'll talk about in a bit) - it's a really nice looking font too. I've now installed it on all the different things I use - eg. Visual Studio, VSCode, LINQPad, ConEmu, WinMerge, etc, etc.

As well as looking really nice - it also supports ligatures - which is basically where multiple characters are represented by a single symbol (or glyph). 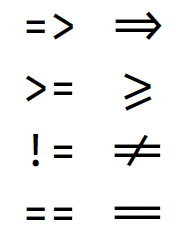 You don't have to actually do anything to turn the two characters into a single symbol, and they're still actually stored as two characters on disk. It's just a font rendering thing. As soon as you type the second character of the set, your editor will render the ligature instead.

It takes a bit of getting used to, and you don't have to have ligatures enabled to use this font. I quite like it though - especially the lambda arrow symbol.

I've been using this for over a month now, and am fairly sure that it's going to be my main programming font now for a long time to come. A massive thank you to Nikita Prokopov for all the hard work he has put into this amazing font!