A few years ago, there was a regular very popular tech event in Oxford called Oxford Geek Nights. Aimed at developers and designers and organised by a company called Torchbox. Obviously a regular event of this size requires a lot of commitment, and unfortunately there hasn't been one for a couple of years now. Up until now that is!!

Last week OGN started back with their first event in two years! I must admit that whilst I had attended a couple of them previously - I hadn't actually been to that many. Well that's certainly going to change moving forward, and hopefully the OGN is back for good, as it's a fantastic and very popular event.

The meetup started at 7pm, with talks starting at 7.30pm. I only arrived there at 7.25 - mainly due unusually heavy traffic - so I was quite surprised that I managed to get a seat right near the front! Especially given how busy it was.

The event started with Olly Willans welcoming everyone to the event, and explaining a bit of background about the OGN, and why there hadn't been one for a couple of years. He also spoke about a man named JP Stacy, who was one of the core organisers a few years ago. Very sadly, JP passed away last year, and a core focus of the night was that it was in honour of remembering him. A bit later, Tom Dyson did a talk all about remembering JP (see below). 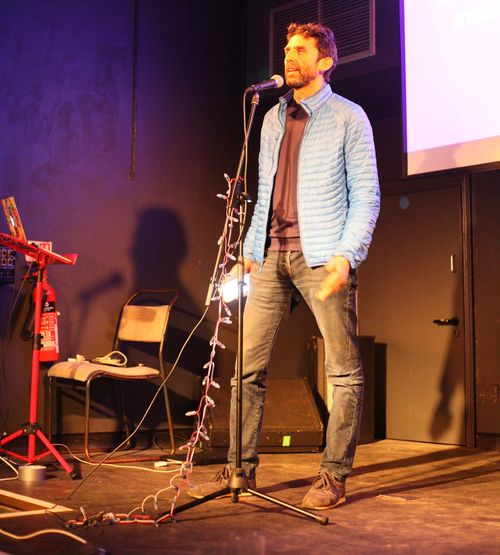 Seren Davies - Accessibility is not just about screen readers

The first talk of the night was by Seren Davies, talking about accessibility. This is one of those topics developers rarely think about, but really should be doing!

Seren talked about various different types of accessibility - extending Microsoft's The Persona Spectrum (see the first PDF download in that link) to also include a "Cognitive" row containing "Dyslexia", "Flu", and "Intoxicated". She explained that she suffers from the Dyslexia herself, so has first-hand experience of this one. Then there's also the two more temporary accessibility issues she added. I know if I'm thinking about accessibility, I think of the longer term issues, and don't really think about someone having the flu or being drunk. I guess it depends a lot on what the app itself does, so as a developer, you should really be thinking about the target audience, and what accessibilities difficulties they may have.

She also talked about RSI, showing a website with a very long infinite scroll, pointing out some of the UX positioning of elements that made this even worse.

She then spoke colour blindness, talking about different colours that do and don't go well together - giving examples of websites with colour schemes that cause issues with people who suffer from colour blindness. She also mentioned that 1 in 12 men suffer from this, and 1 in 200 woman. Looking around the room at the clear gender-bias - suggested that there were a lot of people even in the room suffering from this!

To demonstrate her point about intoxication - , she had the following slide of the Untapped app ... 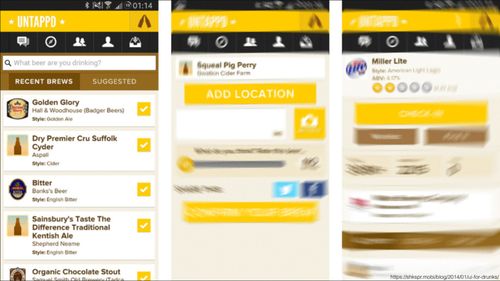 Whilst I don't think I've ever been that drunk (okay, maybe once or twice ;)) - she points out that perhaps the choices of colours in the app aren't ideal!

There was certainly lots of food for thought - especially as I'm lucky to be someone who doesn't really have any accessibility issues - so very rarely think about it when developing applications - and I really should be!

Seren's slides can be found here.

Next up was Ben Foxall, talking all about LEDs! In the past I've kind-of avoided playing around with IoT, as most of the "getting started" stuff seems to be all about LEDs and turning them on and off. Which to be honest, seemed a bit boring. But, Ben's talk was all about LEDs - and it was far from boring! One of the many things that made Ben's talk so interesting was that it wasn't just about turning an LED light on and off - but more about turning LOTS OF LEDS on and off!

His talks was just 15 minutes, but apparently he'd been under the impression that he had 30 minutes. You'd normally expect this to add quite a bit of stress to someone's talk - but somehow Ben managed to turn his "speeding through slides" into quite a funny comedy act, putting the audience into hysterics as he skipped over slides with technical details. I'm still not quite sure how he managed to make that so funny - but he certainly has very impressive speaker skills that's for sure!

If that wasn't enough, he then (as per the screenshot below), had code that generated simplex noise based on input to his laptop (I'm assuming it was the camera!) - so when he moved his hands backwards and forwards, the noise on the screen pulsed, and the physical lights also pulsed to match.

Really impressive stuff, and it's certainly taught me that you can take something as simple and mundane as an LED light, and do some really fascinating stuff!

Ben's slides and code can be found here. Remember when looking at the slides that he used Reveal JS's "vertical slides", as well as horizontal slides - so try pressing the down arrow on each slide before pressing right to move horizontally. 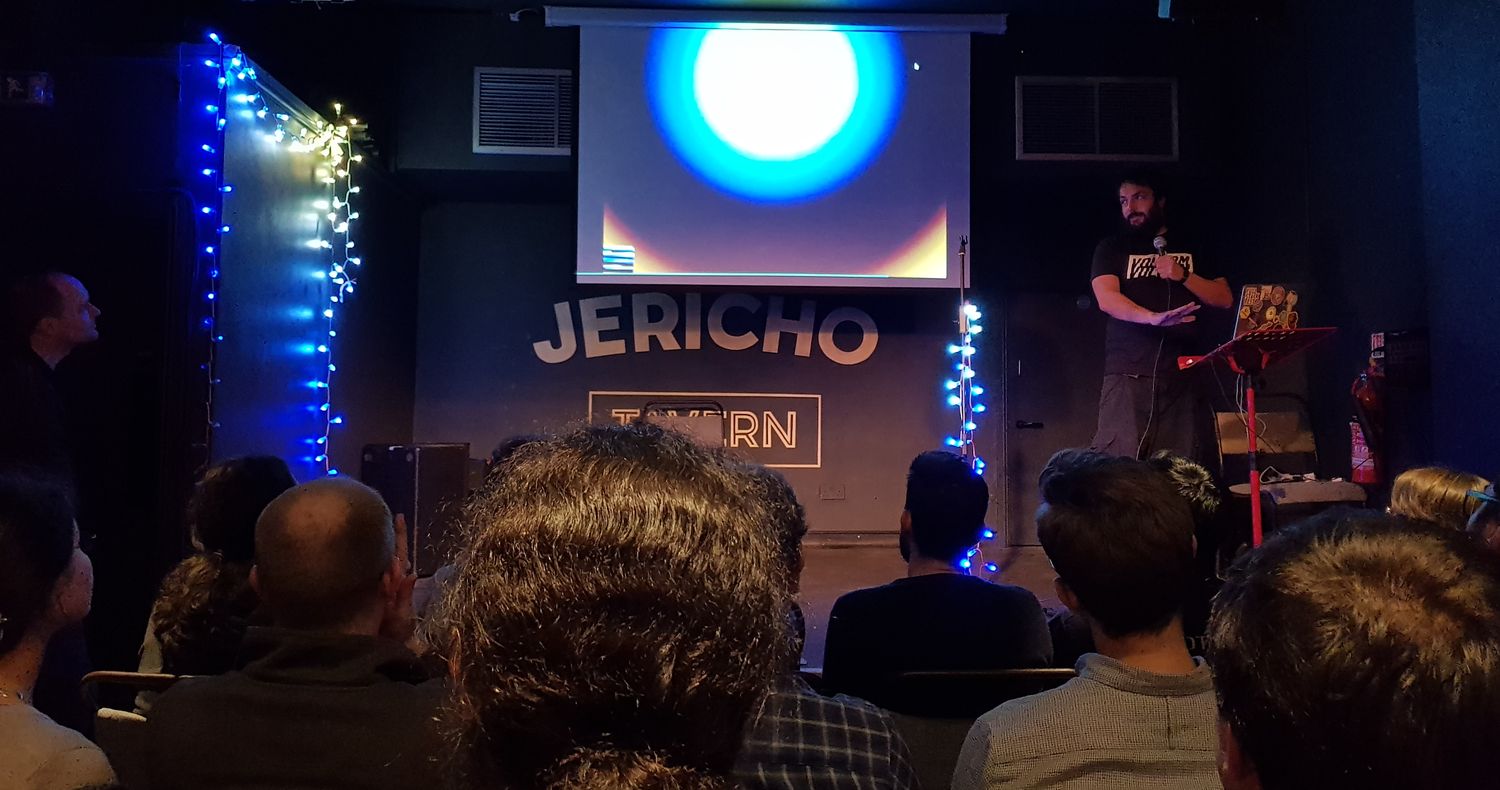 Straight up after Ben, was Tom Dyson from Torchbox. Tom's talk was about a man who I unfortunately never had the opportunity to meet. JP was one of the key organisers of Oxford Geek Nights for quite a few years, and very sadly he suddenly passed away last year whilst visiting his parents in Spain.

When Tom asked who knew JP, a very large percentage of the room put their hands up. It was very clear that he meant a great deal to a lot of people.

Whilst I never knew JP - from all that was said about him on the night - I'm sure that if he could see the event, and hear all the emotion that went into people when they spoke about him - it would have meant so much to him.

A really deep and emotional talk by Tom. He also wrote a blog post about JP last year, which can be found here.

After Tom's talk, there was a 20 minute break. I stood up and left my chair, and immediately bumped into some ex-colleagues I hadn't seen in years! It was really great catching up with them, and chatting about what we were all up to.

Matt Westcott - "In The Future" (song)

Next up after the break was Matt Westcott with his new song "In the Future"! I can't really do it justice trying to explain it, so instead, check out this YouTube video ...

Unfortunately that video doesn't include the singing, so you'll have to take my word for it that there were some pretty funky dance moves thrown in! I also believe that an audio version of that video is on the cards too! 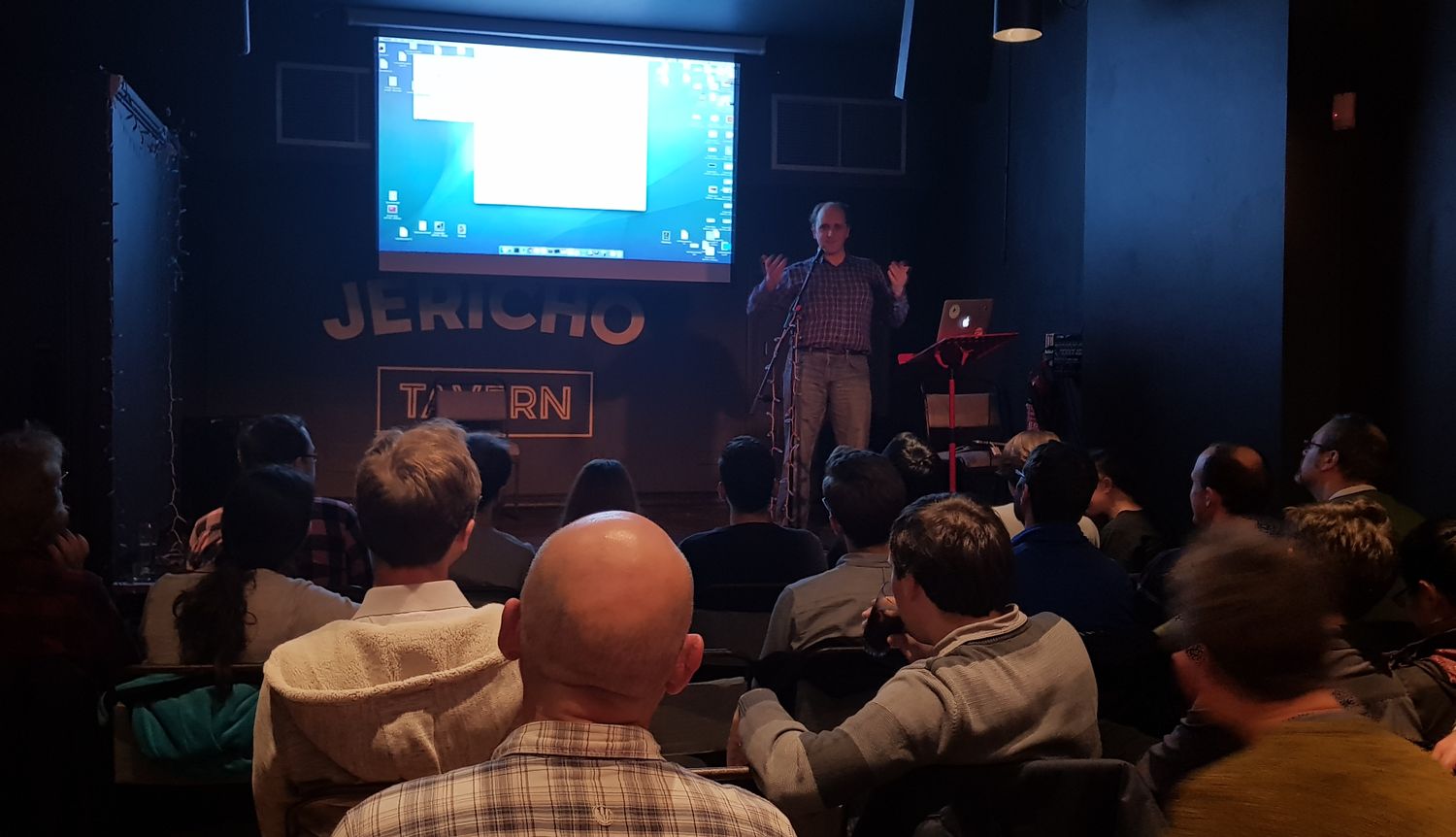 Liela Johnston was up next talking about AI, and her genuine worry about the upcoming Singularity event that's bound to happen soon and completely destroy the Universe. Okay, well, that's not entirely true. Just like her being a massive fan of Elon Musk and Donald Trump might not necessarily be true either! Both of whom featured quite comically in her very tongue in cheek talk about why in her opinion the hype about Skynet taking over human-kind is a bit nonsense.

She spoke about various topics, such as Moore's Law, the Turing Test, and also gave a few humorous examples of where we are now with AI - showing off how the Google's QuickDraw Artificial Intelligence failed to recognise her quite recognisable drawing of a butterfly. She also talked about machine learning, and how whilst the term itself might well be a good cause for the media to try and stir up mass panic - it really is just algorithms finding patterns in data, and nothing to worry about.

Unfortunately her slides aren't available to share, but if you want to find out more about Leila or her talks, she now has a new website, which can be found here. 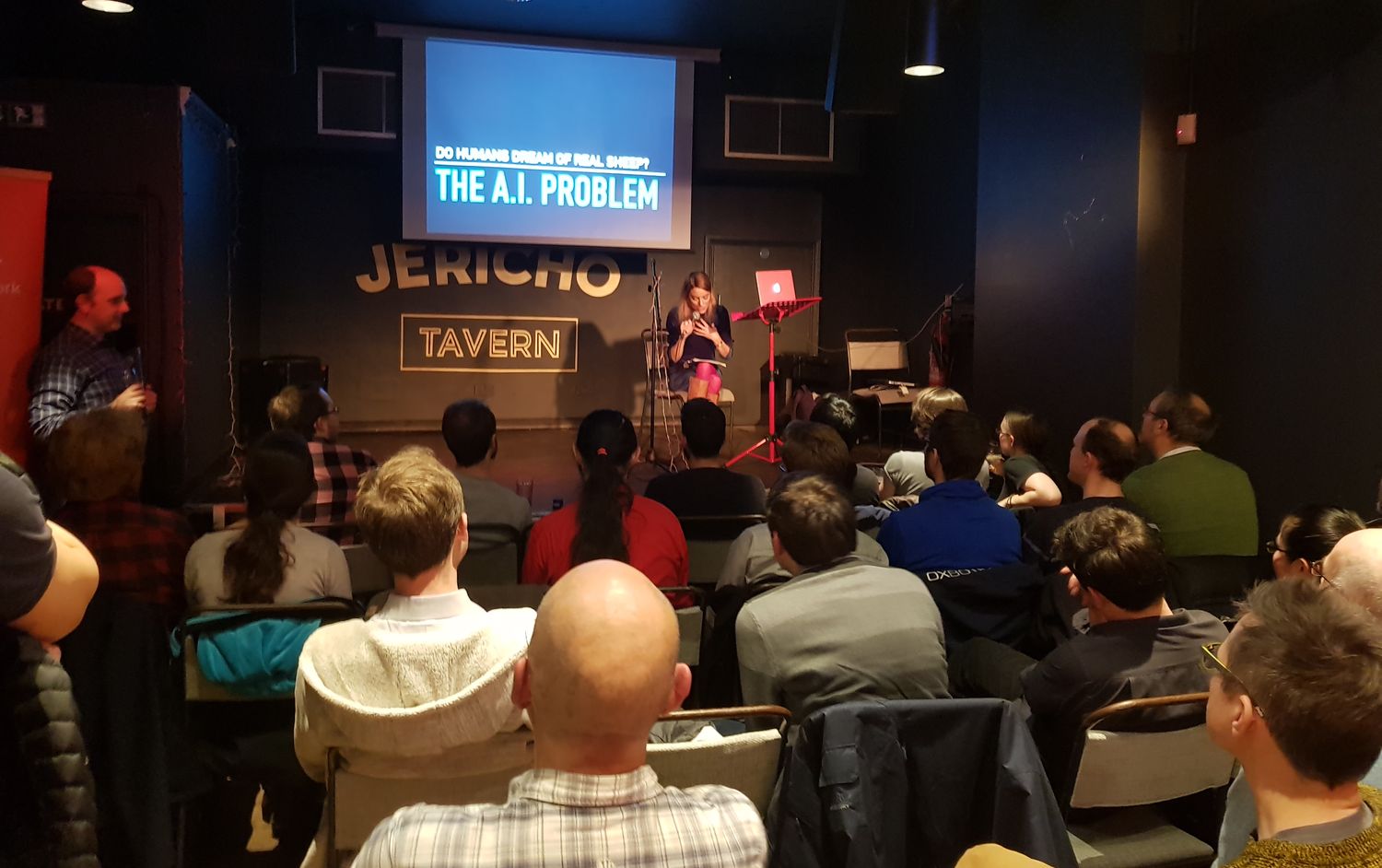 I'm sad to say, that I unfortunately missed Krisztián's talk. Before his talk, I'd had to pop out (nature called!), but unfortunately due the massive popularity of the event, and the venue being crammed to the brim - I couldn't get back in! So I was stuck in the corridor, and couldn't even see the screen, let alone the speaker! This was really frustrating, as I really wanted to see Krisztián's talk. It certainly sounded like everyone enjoyed it though!

I've been in touch with him asking if there's an online version I can share, or a shareable copy of the slides. If there is, I'll update this post with links when he gets back to me.

Krisztián works for Oxbotica, which is a company specialising in writing the software for self driving cars!

Here is a photo, kindly provided by Leila (see above) ...

At that start of the night, Olly mentioned that if anyone wanted to do a 30 second pitch at the end, they should speak to Mel Joy to be added to the list. Coincidentally, she happened to be sat a couple of seats across from me. So I asked her if I could pitch .NET Oxford. I've spoken to Mel a couple of times on the Digital Oxford Slack about me speaking at OGN (see below), but hadn't met her in person till then.

There were quite a few people doing pitches, and I ended up being the second up. I've done 10-15 minutes talks before, and I've done an hour talk before - but 30 seconds?! I know with public speaking, people say to talk slowly - but when you only have 30 seconds, that doesn't give much time! It looked like it was enough though, as a couple of new members joined our Meetup group around the time of my pitch!

I'm very excited and honoured to say that I'm down to talk at the next OGN! Which I believe will be on the 25th April. My talk will be about .NET Core, and what's changed in the .NET landscape these past few years. I have a feeling that there probably aren't that many .NET developers in the OGN crowd - so a lot of people probably still think of .NET as being very closed source, Windows only, corporate, not very popular in the open source space, etc, etc. This has completely changed over the past few years with .NET Core! It's cross-platform, on GitHub developed in the open, plus much more! I'm not really sure how many people outside of the .NET ecosystem are actually aware of how much it has changed - hence my talk. There's a lot to cover in 15 minutes - so it'll be quite a fast paced overview of what's new and shiny - and really trying to show people how awesome .NET is!